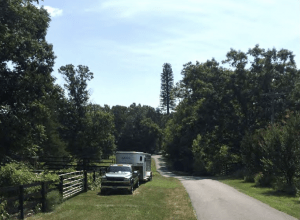 In yet another late night 5-3 vote, the eastern end supervisors and Chair Wheeler voted to approve a special use permit over the objections of those most impacted by the decision and the district supervisor.

On July 13th, the Board majority approved a 135 foot Verizon cell phone tower, loosely disguised as a pine tree towering over the surrounding trees off of Route 29 and across from Carver Road in Gainesville.

Nearly every resident who spoke in regards to the special use permit spoke against the placement of the tower in the neighborhood, including representatives from the Mount Pleasant Baptist Church.

The impacted district supervisor, Jeanine Lawson, stated that she understood cell phone coverage was spotty at times in the Virginia Oaks neighborhood and pledged to work with the applicant to find a different location for the tower which wasn’t as intrusive or an “eyesore” as several residents called it.

Some of the Board conversation prior to the vote was difficult for county residents to follow with Supervisor Andrea Bailey, for example, saying, “I do believe we need to find a different location. And there’s a possibility another location could be found…I will be supporting this project wholeheartedly and I will work with my colleague (Lawson) to find another location if she will indulge me. But I will be supporting the project.” Earlier in the evening, Bailey asked Verizon’s representative if the cell phone tower, dressed as a tree, would “grow.”

Following Chair Wheeler’s defense of the cell tower, Lawson claimed that Wheeler was defending “one of her biggest campaign donors” who had written in to express concern about coverage in the neighborhood. She also expressed concern that Wheeler had not attended the community meetings or visited with the neighbors opposed to the tower ahead of time.  Lawson also responded to Bailey that if she really wanted to work with her to find another location then she would support her motion for denial. Bailey voted against the motion for denial and for the placement of the cell phone tower in the proposed location.

Frustration over yet another 5-3 vote boiled over as some members of the public began to heckle the Board from the gallery once it became apparent how the vote would go. One member of the public shouted that “once again Democrats are for big business and Republicans are for the people.” Other people shouted similar things before Wheeler gaveled them down.