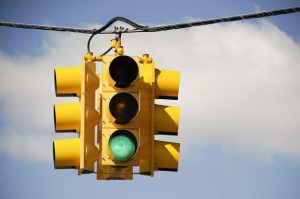 The Virginia Department of Transportation (VDOT) has approved funding for a much anticipated traffic signal at Hoadly Road and Queen Chapel Road near the Dar Al-Noor Mosque.

The light was originally declared warranted by VDOT in 2017. However, funding for the light remained an issue until 2019-2020 when plans for the mosque expansion were revealed and projected to increase average peak Friday car trips from 1,761 to 6,250 per day on the already congested road.  A condition to construct the light was included as part of the Board’s approval of the mosque in February of this year.

A final design and cost estimate is expected by the end of the year and construction could begin as soon as the spring. As part of the approval of the special use permit, Dar Al-Noor is required to fund up to $51,000 for the additional traffic impact associated with the expansion.