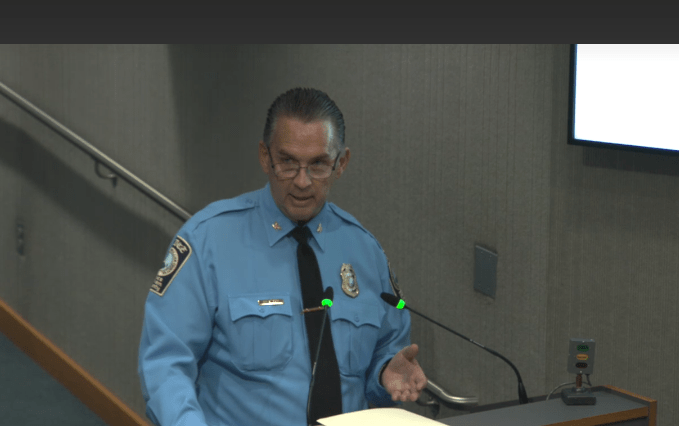 At the Board’s September 7th meeting, Police Chief Peter Newsham came under scrutiny for directing a high ranking Sergeant to follow up with a resident critical of the Board of Supervisors at the request of Andrea and Cozy Bailey which resulted in a personal visit to the resident’s home.

Newsham, on hand to provide the 2020 Annual Report detailing crime and use of force statistics, was questioned by Supervisors Candland, Lawson, and Vega for the controversial use of taxpayer dollars believed to suppress speech critical of the Board.

Supervisor Candland led off the questioning, inquiring with Newsham about codes cited by the police department as justification for the visit.  Candland read from Virginia code 18-2-60, “threats of death or bodily injury to a person or member of his family” and code 18-2-152.7:1 – “Harassment by Computer.”

When pressed how these codes were applicable to the situation, Newsham used 9/11 as the reason why he felt Mr. Hand’s e-mail to the entire Board describing Prince William County resident, Alan Gloss, as a “Government Target” (meaning targeted by his government) of Andrea Bailey was the reason why he acted upon the Bailey’s purposeful distortion of the e-mail meant to make Bailey appear as a possible victim of a target herself.

Newsham attempted to turn the tables on Candland by asking if Candland was “ok” with the e-mail not being followed up on given 9/11, whose 20th anniversary would fall just four days later.

This resulted in a heated exchange as Candland fired back that he was not there for questioning and that the purpose of his inquiry was to determine whether or not Newsham and the Bailey’s had abused their power in this situation.

Next, Supervisor Vega questioned Newsham on the appearance of a double standard within Prince William County’s justice system whereupon Supervisor Bailey’s third request to investigate her constituent was followed up on due to a perceived threat, yet when county resident, Alan Gloss, filed a similar report citing Andrea Bailey’s now infamous hot-mic moment where she asked “what are we going to do about Alan Gloss?” no such investigation or visit was made to the Bailey home.

“The only way I can explain that is the investigation of threats is not precise.” He went on to reiterate his belief that it may have been the government who was the target of a resident mentioned in the e-mail.

Given the incredibly quick turnaround from when the residents e-mail critical of the Board was sent and when the police showed up at his doorstep (less than 24 hours), Supervisor Vega questioned what the average time frame was between when a “threat” is communicated and when someone shows up at their home. Newsham said it depends on the circumstances.

Finally, Supervisor Vega questioned Newsham, “what is the percentage of home visits made by police officers once it’s been determined the person has broken no laws?” Newsham responded that he did not know. In a follow up e-mail to Newsham to ascertain this information the following response was received:

“When we receive an allegation of a threat, it is evaluated based on the nature of the threat, and a determination is made as to whether the person who communicated the threat should be interviewed.  This is a judgement call based on the totality of the circumstances.  When interviews are conducted, they are conducted to obtain additional information for the investigation.  When an interview is conducted, it is unknown if an interviewee has done anything wrong prior to the interview.  A thorough determination regarding a violation of the law cannot be made until the investigation is completed.”

However, as shown in the bodycam video footage, the officer told the resident several times, including within 30 seconds of arriving, that the resident had “done nothing wrong.” Supervisor Vega followed up asking that if an individual had been pre-cleared of having “done nothing wrong” then why was an interview necessary to determine whether or not the individual had committed a crime.

Newsham responded that he did not know why the officer told the individual he had done nothing wrong.

Finally, Supervisor Lawson reiterated her belief to Newsham that she believes he “was pressured by the Bailey’s to send this officer out to Mr. Hand’s home because what we do know is this wasn’t the first time that Supervisor Bailey took issue with criticism from Mr. Robert Hand.” She went on to say that Newsham should have considered the context of the e-mail and the subject line, considering it was in response to Supervisor Bailey’s perceived potential targeting of a resident herself and that Bailey routinely “arcs” to stating that she believes she is under threat from residents critical of the Board. “Supervisor Bailey has a pattern of doing this so that’s why I took exception with the memo that you wrote.”

“Does Mr. Hand sometimes use language that is bothersome for me? Yeah, I believe so, but it’s his First Amendment right. But what I never want to happen is for your department to be used as a political weapon for Supervisor Bailey, me, or anyone else in Prince William County government, ” said Lawson.

In response, Newsham denied being pressured.

Ironically, the Prince William Times, a persistent and vocal mouthpiece and defender of Board majority in Prince William County, took the opportunity not to hold Bailey accountable, but accused the Board minority of being the ones playing politics with the police instead.

None of the other five Supervisors bothered to ask Newsham any questions about the incident or made any statements regarding the matter.